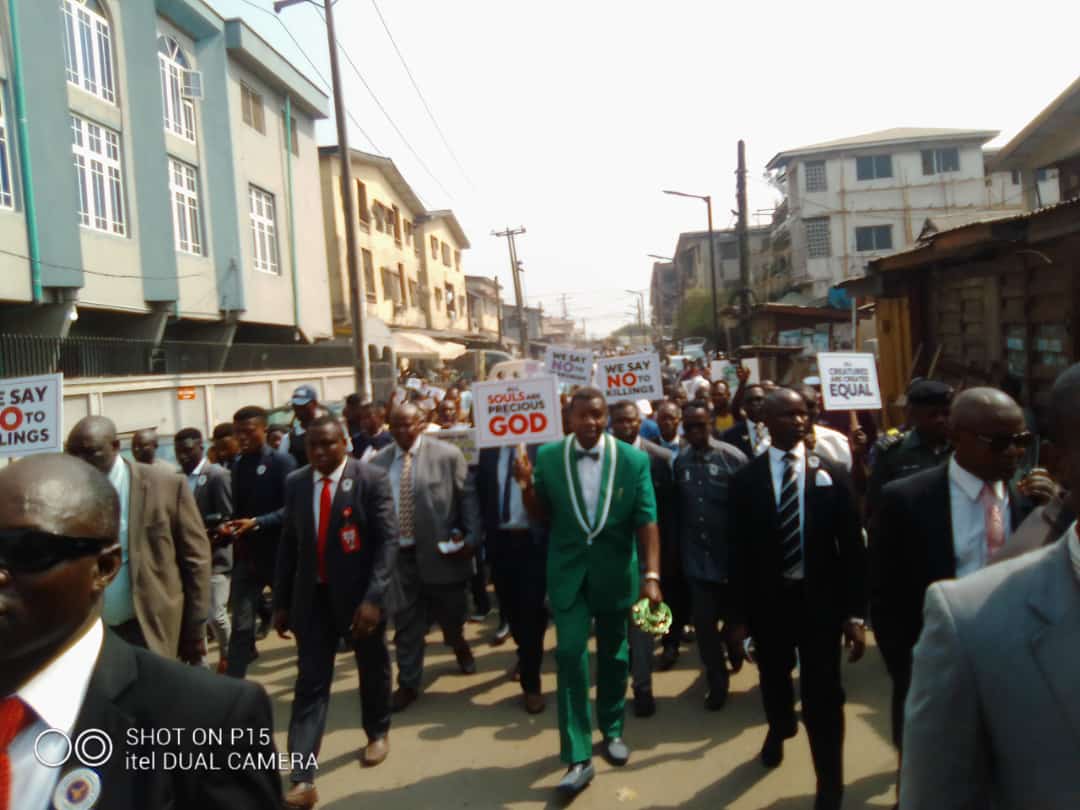 General Overseer of the Redeemed Christian Church of God (RCCG) Pastor Enoch Adeboye is among protesters marching against killing and insecurities in the country.

The match is against general insecurities and killings in the country, especially in the northern states.

The match commenced at 11 am after pastor Adeboye ended the service at the National Headquarters of the church in Ebute Metta, Lagos.

There have been rising insecurities across the nation in recent times, and this has lead to calls from some quarters for the president to sack the service chiefs.

A senator from Abia state, senator Abaribe went as far as calling on the president to step down as he has failed to protect the citizen of the country.

President Buhari did not help matters when he admitted that the killings and insecurities in the nation actually took him by surprise.

In the latest killings, an aspiring young catholic priest who was among four students that were kidnapped from a seminarian in Kaduna have been found dead.

During his campaign for the presidential election in 2014 president Buhari had asked then President Goodluck Jonathan to resign as he had failed to secure the nation.

Interestingly, Vice President of Nigeria is an ordained senior pastor of the Redeemed Christian church of God.

It remains to be seen how the Nigerian government will react to Adeboye’s protest march.

Sim cards to be linked to BVN to curb crime – FG

All Progressives Congress chieftain, Bola Tinubu, on Monday, urged the Federal Government to recruit at least 50 million youths into the Nigerian Army to boost Nigeria’s fight against terrorism, banditry and all forms of internal and external security threats confronting the nation.

Tinubu spoke at the 12th colloquium to celebrate his 69th birthday in Kano State.

He said, “We are under-policed and we are competing with armed robbers and bandits to recruit from the youths who are unemployed —33 per cent unemployed?”

“Recruit 50 million youths into the army,” he stated, adding that “what they will eat —cassava, corn, yam, will grow here.”

The APC chieftain, while reacting to recent statistics by the National Bureau of Statistics that over 23 million Nigerians are jobless, also urged the government to create jobs for youths in the agricultural value chains.

He said, “Don’t talk about illiteracy, anybody who can hold a gun, who can handle a gun, who can rooster and shoot is technically competent to repair a tractor in the farm.”

The former Lagos State governor, however, saluted “very creative” youths in the country, saying, “They are angry, they are showing their anger but we will appeal to them”.

The colloquium held in Kano, was themed, ‘Our Common Bond, Our Common Wealth: The Imperative Of National Cohesion For Growth And Prosperity’.

The event was virtually attended by the President, Major General Muhammadu Buhari (retd.), who chaired the occasion and restated the essence of a One Nigeria.

The colloquium was also virtually attended by the Vice-President, Yemi Osinbajo; House of Representatives Speaker, Femi Gbajabiamila; Senate President, Ahmad Lawan; amongst others, whose itineraries were disrupted by poor weather from the Abuja airport to the Kano airport.

The Nigerian Army has said it is not their duty to expose those sponsoring Boko Haram in the country. Coordinator of Defence Media Operations, John Enenche, stated this at a media briefing on Thursday.

Enenche admitted that the Army knows that some criminal groups have heavy financial backing, but its major task is to fight “terrorism and other criminality”.

He explained that the National Intelligence Agency (NIA) and the Department of State Services (DSS) were responsible for revealing the sponsors.

“It is not the duty of the military to uncover the sponsors.
Our duty is to remain in the frontline and defeat terrorism and other criminality and that is what we are doing.”

“We have the National Intelligence Agency (NIA) and the Dept of State Security (DSS). It is their responsibility to gather intelligence on the sponsors of the terrorists and not the military,” Enenche maintained.